An Information site for the Parents of Performing Children
http://notapushymum.com/phpbb/

by Darmont
Hi there, i wanted to just let you know of a bad experience my daughter had online.

A job was advertised on Mandy.com website, by Pressure Pit Gameshow, where they advertised for children 10-14 to be paid £100 (with travel too) to be in an online gameshow (YouTube and Instagram) where there kids answer maths questions and if they get wrong, they get gunged.

When applying, the guy responded and asked us to communicate via Instagram messaging, so immediately taking the chat away to a private place.

There he actively chatted with my daughter (age 11), for about an hour, asking lots of questions about what type of gunge she wanted, colour, custard? and would she gunge him? If she didn't reply immediately would keep messaging.

He then asked her if he could call her on Instagram, which I was over seeing (but he didn't know). I did think this was a strange way to cast someone, but because it was on Mandy.com, we continued. I just thought it would be a chatty call to see how much fun she was.

He was an odd looking man no teeth at front, pouring yellow gunk all over his head, not speaking.

I was next to her when he called and I could see she was freaked out and uncomfortable so she said she had to go and cut the call. He was very creepy, and this was not the casting chat that we had expected!

I feel so stupid because I believed it was part of the casting process, and while I was keeping a close eye on everything that was said, I feel bad for letting him call her.

Mandy.com have taken this seriously and taken the job down and advised us to cut contact on any other social media.

But the Instagram page is still up on there and he is advertising for kids!

by admin
Thankfully you were supervising! There are some dreadful lowlifes around and this business seems to attract a fair few. A good warning for others to be careful as well and I do hope your daughter is OK?

by Yorkshirepudding
Thank you for sharing Darmont.
It is a really useful cautionary tale, and as said above, so good that you were supervising throughout and I hope you are both ok.

Please dont feel foolish - the unscrupulous rely on the fact that the rest of us have to have s degree of trust to make the world go round. You were there on hand and made sure nothing bad happened and can learn together from the experience. Sounds like parenting to me x

by Darmont
Thank you Admin and Yorkshire pudding. I have since had contact with a lot of other parents who have had similar experiences including some very dodgy messages, and several of us have reported to the CEOP. He did not know anything about licenses or release forms, and provided a home address for the "shoot".

by Yorkshirepudding
Have you reported it to Mandy too?
They have followed up on people running unlicensed shoots when I have reported it in the past, and they have also taken down and blocked a recent posting which invited submissions only to then spam you with lots of self promotional rubbish from the original poster.

by Orangefox
UPDATE: I think this person is doing this again under the gamer show name “What A Mess”. I was contacted on my Instagram about this and sent an email, which seemed to be from a free, disposable email address. I have blocked them, but just wanted to warn anyone who got the same. I have attached an image of the email. 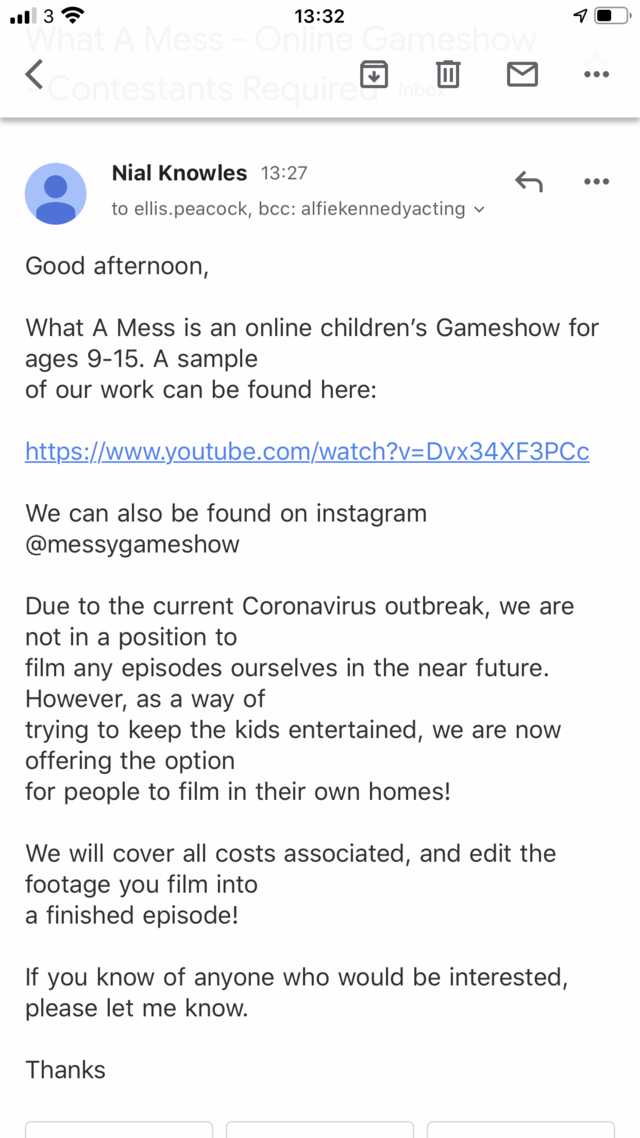 by Curiousdancemum
My kids have had it too. Thanks to this I knew what it was and blocked.

by Darmont
Gosh he's still at it then, wow. You have to keep such a close eye it's sad.
All times are UTC+01:00
Page 1 of 1
Powered by phpBB® Forum Software © phpBB Limited
https://www.phpbb.com/